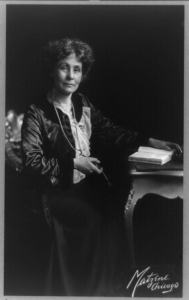 In 1999 Time Magazine named Emmeline Pankhurst as one of the 100 Most Important People of the 20th Century, stating: “she shaped an idea of women for our time; she shook society into a new pattern from which there could be no going back.” What better way to introduce her to We Are The 51.

Emmeline’s role was crucial in achieving women’s suffrage but what else do you know? That she had 5 children? That she was a member of the Conservative Party? Me neither!

Emmeline was born Manchester to politically active parents. Her mother came from the Isle of Man, from a lineage that included many accused of agitation. The Isle of Man was the first country to grant women the right to vote in national elections. Emmeline’s father was politically active, serving for several years on the Salford Town Council, her paternal grandmother worked with the Anti-Corn Law League, and her grandfather was present at the Peterloo Massacre.  Emmeline was introduced to activism herself from an early age, her parents welcomed American abolitionist Henry Ward Beecher into their home when he visited Manchester and she was introduced at the tender age of 8 to the women’s suffrage movement.

Emmeline was encouraged to learn the home-making skills desired by potential husbands as, despite her family background and an education in Paris, it was still expected that, as a woman, her aim should be to marry well and avoid paid work. While her family supported the idea of suffrage they didn’t expect women to have ambitions and careers in line with their male counterparts.

After her marriage, and with the support of her husband, a barrister known for supporting women’s right to vote, Emmeline became involved with the Women’s Franchise League, the inaugaral meeting of which was held in her home, which campaigned for the right to vote for both married and unmarried women.

Pankhurst was also active in other social movements and met and befriended Keir Hardie, who went on to create the Independent Labour Party (ILP). Excited at the prospect of confronting wider social issues Emmeline resigned from the WLF and applied to join the ILP. The local branch refused her admission as she was a woman!

She did manage to join the ILP at a national level and one of the first things she did was to distribute food to poor men and women through the Committee for the Relief of the Unemployed. She was appalled by the conditions she saw in the Manchester workhouse and immediately began to change and improve them.

After the death of her husband, which left her with significant debt, she attained a paid position as Registrar of Births and Deaths in Chorlton. This work gave her more insight into the conditions of women in the region, which reinforced her conviction that women needed the right to vote before their conditions could improve.

Emmeline founded the Women’s Social and Political Union (WSPU), an all-women suffrage advocacy organization which soon became known for it’s “militant” tactics. After years of promises about women’s suffrage from members of parliament there had been no progress and Emmeline and the WSPU felt the time had come for deeds not words. Members smashed windows and assaulted police officers and Emmeline and her fellow activists, including her own daughters, were sentenced to repeated prison sentences, where they staged hunger strikes to secure better conditions. While other organisations committed to women’s suffrage agreed to work with the ruling political parties, the WSPU insisted on confronting all parties which did not make women’s suffrage a priority. This was not universally popular. Fellow suffragist Millicent Fawcett declared that the hunger strikes staged by Emmeline and fellow WSPU members in prison were mere publicity stunts and went further by suggesting that militant activists were in fact the chief obstacles in the way of success of the suffrage movement.

With the start of World War I the WSPU turned it’s attention towards supporting the British Government against the threat of Germany by urging women to support the industrial and military efforts. They called a halt to all militant until fighting on the European mainland ended. She approached advocacy of the war effort with the same energy and determination that she had previously given to the fight for women’s suffrage.

After the war Emmeline transformed the WSPU once more.  It became the Women’s Party, dedicated to promoting women’s equality in public life. While she still campaigned for the rights of women it was in a far more moderate way.

Her transformation from a militant activist and supporter of the left-wing was completed when Emmeline joined the Conservative Party and ran as a candidate for Parliament.

Emmeline died just weeks before the Representation of the People Act extended the vote to all women over 21 years of age. Her funeral was a grand affair and press coverage around the world recognised her tireless work on behalf of women’s right to vote – even if they didn’t agree on the value of her contributions. I think that today, we can see and celebrate her remarkable contribution.

Emmeline Pankhurst was nominated by Sue Cairns of www.purplehorizonstraining.co.uk
To get involved and sponsor a woman from history who you think deserves greater recognition, click here