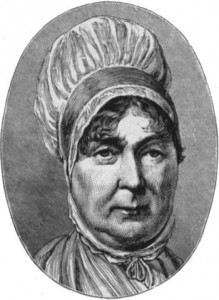 Known now as the woman who’s removal from banknotes sparked a furore but who was Elizabeth Fry?

Elizabeth Fry was an English social reformer and Christian philanthropist who became known as the “angel of prisons” as she was the driving force behind legislation to make the treatment of prisoners more humane. She believed that, “Punishment is not for revenge, but to lessen crime and reform the criminal.”

Her interest in prison reform began with a visit to Newgate prison. The conditions she saw there horrified her. The women’s section was overcrowded with women and children, some of whom had not even received a trial. They did their own cooking and washing in the small cells in which they slept on straw. Elizabeth focussed on the behaviour of women rather than dwelling on what was considered at the time to be “their moral corruptness”.

Elizabeth brought in clean clothes for prisoners, started a school for the children and read from the Bible. She got women prisoners to knit and sew in order that they could earn a little money. In 1817, she wrote, “Already, from being like wild beasts, they appear harmless and kind.”

Also in 1817 she helped found the Association for the Reformation of the Female Prisoners in Newgate, which led to the eventual creation of a national society for promoting the reformation of female prisoners. This was, in all likelihood, the first “nationwide” women’s organisation in Britain.

Not only did Elizabeth visit women in the prisons she encouraged other middle class women to do so, thereby helping to overcome the official opposition to reform. Elizabeth was not a classic disciplinarian and did not impose rules. Instead she made suggestions and invited the prisoners to vote on them, putting an educated prisoner in charge rather than taking control herself.

Elizabeth also mad it her mission to tell the outside world about the plight of women and children in prisons and used her connections in high places to good effect, speaking to select committees in the House of Commons and the House of Lords.

At a time when it was common for prisoners to be transported to Australia, Elizabeth persuaded the government to make improvements to prison ships and to ensure that women prisoners found homes and jobs in Australia.

Elizabeth also worked on behalf of the homeless, after being shocked by the death of a boy who froze to death on a doorstep. She established a night shelter in London and instituted the Brighton District Visiting Society, with volunteers visiting the homes of the poor and providing help and comfort to them.

In 1840 Elizabeth opened a training school for nurses, a programme which inspired Florence Nightingale, who took a team of nurses trained at the school to assist wounded soldiers in the Crimean War

Her work was not always welcomed by the establishment. The Reverend Sydney Smith wrote, “We long to burn her alive,” going on to add that “Examples of living virtue disturb our repose and give birth to distressing comparisons.” In addition, rather than praising her work with and on behalf of women, some critised her for neglecting her own wifely duties. In this we see echoes in the way women are still critised when putting carer alongside homemaking!

In 2013 the decision to replace Elizabeth Fry with Whinston Churchill on the £5 note prompted protests and discussions about female representation on banknotes.

An online petition – signed by 35,000 people – and a threat of legal action caused the Bank of England to reconsider and to select Jane Austen as the replacement for Charles Darwin on £10 note.

In addition, the Bank of England was caused to reassess the selection criteria for future banknotes which should ensure female representation in the future.