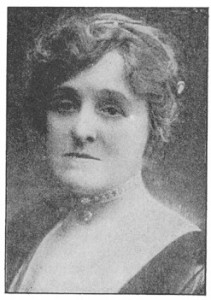 EDITH WHARTON
Edith Wharton was born into a wealthy and distinguished family; on both sides her family was old-money New York business aristocracy.  Her maiden name was Jones and it is said that the phrase “keeping up with the Joneses” referred to those wanting to emulate her family in New York society.

Edith was the first woman to win the Pulitzer Prize and was nominated for the Nobel Prize for Literature three times. She was a close friend of the novelist Henry James and, like James, her witty novels and short stories focus upon America’s privileged classes. From the start of 20th century to the end of World War I, the work of James and Wharton dominated American literature but, unlike James, her star has waned.

That said, in 2014 The Guardian published a list of the 100 greatest novels of all time. The Age of Innocence, her 12th novel, came in at No. 45. This book inspired many adaptations: most notably Martin Scorsese directed a film version starring Michelle Pfeiffer and Daniel Day-Lewis.

Edith Wharton’s novels show great social and psychological insight and often expose the conflict between the individual and the social group. Her tragic heroines and heroes are the victims of convention: the pressures placed upon individuals within or trying to access a social group, particularly a group which might be though of as above their station.

The novel Ethan Frome, my personal favourite and adapted for film starring Liam Neeson, is a rare excursion beyond the social circle of the upper classes.

During World War I, Edith established two organizations for war refugees: the Children of Flanders and the American Hostel for Refugees. She also made several visits to the French front where she distributed medical supplies and made observations from which she wrote war essays influencing Americans to support the Allied cause.  Her relief work also included setting up workrooms for unemployed Frenchwomen, organizing concerts to provide work for musicians and opening  hospitals for those suffering with tuberculosis.  Elizabeth was awarded the French Legion of Honor for her courage and distinguished work.

While Edith Wharton’s work is still read, studied and adapted it is often considered as inferior to that of Henry James and contemporaries such as F Scott Fitzgerald. As such, Edith Wharton deserves greater recognition and a place in this series.