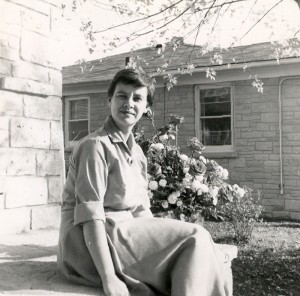 With thanks to the Esther M. Zimmer Lederberg memorial website.

Esther Lederberg was an American microbiologist and a pioneer of bacterial genetics. In common with many female scientists, she hasn’t received the credit she deserved.

As her colleague Stanley Falkow, who composed a eulogy on her death, said
“Experimentally and methodologically she was a genius in the lab.”

Further it was said by Luigi Luca Cavalli-Sforza who worked with both Ester and her husband Joshua that,
“Dr. Esther Lederberg has enjoyed the privilege of working with a very famous husband. This has been at times also a setback, because inevitably she has not been credited with as much of the credit as she really deserved. I know that very few people, if any, have had the benefit of as valuable a co-worker as Joshua has had.”

Studying together they discovered that discovering that bacteria can mate and exchange genes. Joshua Lederberg won a Nobel Prize, Esther did not. When the award of the Nobel prize was announced in late October, 1958, Joshua Lederberg said he was “abashed” to receive the award because it over-emphasized individual achievement, however his acceptance speech made no mention of Esther, his wife and “close associate in the laboratory”

For non-scientists her achievements may seem difficult to understand but they are brilliant, worthy of a Nobel prize in fact.

Esther Lederberg was the first to isolate lambda bacteriophage, a DNA virus, from E coli. Her work led to an understanding of a mechanism known as specialized transduction, an important factor in explaining one mechanism of the transfer of bacterial resistance.

Esther was responsible for developing a workable way of removing bacterial colonies en masse from the plate on which they were grown. The technique, known as replica plating, had eluded scientists until Ester came up with a technique to make this possible and replicable.

Away from the lab Esther was a lifelong devotee of early music, playing with the Mid-Peninsula Recorder Orchestra even when, later in life, she was in need of a mobility frame. She also loved the works of Charles Dickens and Jane Austen, and belonged to societies devoted to studying and celebrating their works.

This article explicitly attributes its information and images to the Esther Lederberg Memorial Web Site, “http://www.estherlederberg.com”
To get involved and sponsor a woman from history who you think deserves greater recognition, click here