Bernadette had been dead two weeks when her sisters showed up in Doyle’s living room asking for the statue back. Ann Patchett certainly knows how to write an arresting beginning to a story!

The recently widowed Bernard Doyle and his wife were both from large Irish Catholic families in Boston. The statue in question, of the Virgin Mary, has a legend attached to it and has been passed down from mother to daughter in Bernadette’s family for four generations. However, Bernard and Bernadette had only boys – Sullivan, their natural son, and adopted siblings, Tip and Teddy.

From the opening chapter, I expected a mystery about the statue, but the story takes off in a different direction. We re-join the family sixteen years later. Sullivan has left home, Tip is a student at Harvard, a scientist studying fish, and Teddy is considering becoming a priest. Their father, although loving, is controlling and would prefer the younger boys to be politically motivated and to become leaders like him – a former Mayor of Boston. Sullivan seems to have been written off in this respect.

On a snowy winter night, Doyle, Tip and Teddy attend a Jesse Jackson lecture, after which Tip declares that he can no longer go to political events which take him away from his beloved lab. He is talking about this so passionately that he steps into the road without looking and is hit by a car. He breaks his ankle, but would have been much more badly injured if it hadn’t been for an unknown woman who pushes him out of the way and is knocked unconscious in the process. An ambulance is called and the whole group, including the woman’s young daughter, is taken to hospital.

The daughter, Kenya, has nowhere to go and the Doyles take her home with them, discovering when they arrive that Sullivan has also unexpectedly returned. The bulk of the story unfolds in the next twenty-four hours when revelations are made and the dynamics of the family are changed for ever. And what of the statue? It assumes significance at the very end of the book, but by then we, the readers, know more than the Doyles and can appreciate the twist in the tale.

I found Run really enjoyable and read it very quickly, despite not taking to any of the characters until Kenya came along. It raises interesting questions about families – their allegiances and rivalries, the roles of nature and nurture, and the lengths to which a parent will go in order to protect a child. 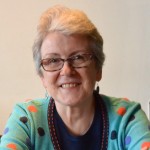 RUN was reviewed by Librarian at Large Anabel Marsh.

You can read Anabel’s blog here