What would the Co-operative Group need to do, as an absolute minimum, to be recognisable as a co-operative business, as defined by the International Co-operative Alliance?

In my professional opinion, as an experienced co-operative business advisor, the essential co-operative features for the Co-operative Group would be:

2. A clear purpose for the benefit of its members, as agreed by members. (For example, “The Society exists in order to serve its Members by carrying on business as a co-operative in accordance with Co-operative Values and Principles.”)

3. Membership is open to all who are regular customers of the Society and invest an agreed minimum amount of shares.

4. Members may exercise their right to invest more than the minimum shares in the Society, on a one member, one vote basis – not one share, one vote. (Preferably up to the statutory limit of £100,000).

5. A clear list of decisions that may only be taken by a General Meeting or referendum of the wider membership. (For example, acquisitions, disposals, loans entered into, additional share offers – all above a certain threshold.)

6. At least 10% of individual members need to vote in Society elections or referendum, for the result to be valid. (For example, if there are 2.5 million individual members who are regular customers, quorum would need to be 250,000 members. This isn’t far from 222,222 votes in last year’s Group elections.)

8. The ICA states that “Co-operatives are democratic organisations controlled by their members”. Therefore a majority of all Directors need to be elected by the membership, in contested elections. (It is not credible to suggest that “take it or leave it Director elections” enable democratic member control in a large consumer co-op society in the UK.)

9. Gaps in Board skills and experience are filled by competent independent non-executive directors, who must not form the majority of Directors. (For example, a Board of 11 could have 6 member elected directors, 3 INEDs and 2 Executive Directors.)

11. Increased freedom of information with members. (For example, members’ right to view a register of Director’s interests, and voting record of each Director, multiple channels of communication with Directors.)

12. Co-op Dividend. The power to distribute part of annual profit as dividend to members, in proportion to purchases from the Society.

13. Common ownership to discourage personal gain from demutualisation. (For example, upon winding up, any residual assets should go to another common ownership society in membership of Co-operatives UK.) (It is desirable to offer disposals to co-operatives first.)

It may be that the agreed governance model for the Group is different to the ICA’s co-operative principles. A model may even be enforced by banks or regulators. Perhaps the Society will be run more like a Nationwide Building Society or a Morrison’s. But if that becomes the case, let’s not pretend it is a co-operative, nor take advantage of unique co-operative branding when it is not merited. 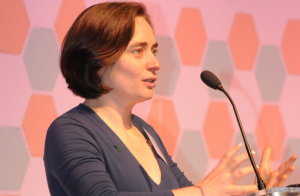 Jo has been a practical and successful co-operator since 1993 when she co-founded Equinox housing co-operative. Jo was Business Development Manager for Co-operatives North West 2008 to 2011, delivering high quality member services to over 350 co-operative enterprises in the region. Jo has been a Director of CBC since 2007.

As Business Manager and founder of Olive Co-operative, Jo promoted responsible tourism and fair trade with the Middle East. She led 200 clients in small study groups to Palestine/Israel, brought fairly traded Palestinian olive oil and other products to the UK market, and raised £30,000 from 400 donors to plant new olive trees in Palestine. At the Co-operative Group, as Head of Co-operative Action (now the Co-operative Enterprise Hub), Jo promoted co-operative solutions in every sector – from care co-ops to car clubs.