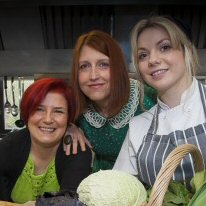 Seven employees from a cafe in north Wales have purchased the business and turned it into a worker co-operative.

Caffi Florence in Loggerheads Country Park, near Mold, was bought by the employees who took advantage of the opportunity of purchasing the cafe when its previous owner decided to step away from the business.

The cafe specialises in fresh, seasonal, homemade and locally sourced produce and has safeguarded over 15 jobs and a number of seasonal positions at the Country Park venue.

Nicola Price-Rohan, one of the new owners, said: “We are delighted to take over Caffi Florence. As a co-operative, we believe that we have the potential to take the business and grow it further using the principles set out by its original owner. As owners of the business we can plan for the future and ensure that Caffi Florence offers great food and great service at Loggerheads Country Park for a long time to come.”

Jane Clough, the previous owner was keen that the cafe continued using the principles of sourcing food locally and preparing dishes from scratch. She had discussed the potential for employee ownership at a very early stage, identifying a core group who would be able to step up to the demands of running the business. The knowledge that the staff were keen to take over and that they had the skills to do so helped her to make the final decision to leave.

She commented: “It is great to know that the key principles of Caffi Florence are in safe hands and that the new owners will be able to keep the business going and grow it in future years.”

Wales Co-operative Centre supported the creation of the new co-operative, and the organisation’s Sarah Owens oversaw the ownership transition process. She said: “Caffi Florence is a sustainable business that has been run on strong ethical lines and with high quality standards for a number of years. That the business is taken over by the staff is consistent with these principles. This just goes to prove how important the employees are to the sustainability and growth potential of any business. This buy-out has ensured that over 15 jobs in the area are maintained and safeguarded”.

Funding to help the deal go through was sought from the Welsh Government and European Union to support the business succession service.