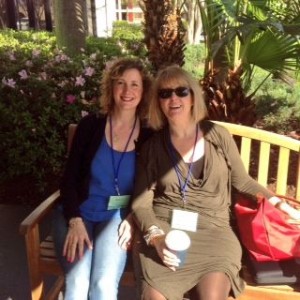 Colette Grant is a successful entrepreneur, co-founder of Grant Property Ltd and continues to be an executive director of the property company she helped found. She’s also the Vice Chair of The Entrepreneurial Exchange and a Trustee of the charity Enlight.

Building on this success, Colette has now founded a coaching and training company called Optimise Your Potential Ltd. She’s also a Licensed Trainer of Neuro Linguistic Programming (NLP) and is currently studying with the globally recognised Supercoach Academy in Los Angeles.

Tracking Colette down for an interview was tricky, fortunately, we both have a commitment to life-long learning and learning from the best, so we found ourselves attending the same course in Orlando, Florida, which is where I finally caught up with her.

When I asked what had attracted Colette to her current board positions she told me that the key driver for her decision to put herself through the gruelling election process for the position of Vice Chair of The Entrepreneurial Exchange was that,

“I wanted to show my ten year old daughter that you can do anything you want to do. I think it’s important to shape the future and have something useful to contribute and I like the idea of showing people what’s possible.”

We delved further into her role as a Trustee and continuing role as a director of Grant Property. Colette described how important it is to her that all types of voices are heard in a board room, she said,

Colette’s career history has led her to where she is now through her ability to demonstrate great leadership. Whilst building a business in the property sector has been challenging, Colette has stuck to some key principles, she states that these are;

“Do the right thing for the right reason. Always be yourself and believe in people because it’s only through people that you can ever build a great business.”

The UK has plenty of people who are capable of rising to the challenge of a position on the boards of charities or highly influential business organisations such as The Entrepreneurial Exchange, so what was it that led to Colette being selected for her role as Trustee for Enlight and her successful election to the board of EntEx.

In her own words, Colette talked to me about the vital importance of creating and maintaining an excellent reputation in the business community. Her entire ethos is that “you create your reputation as you go through life” and that “people are drawn to you because of the way you conduct yourself in business and the way you get things done.”

She goes onto say, “It’s really important to deliver what you say you’re going to do. People will judge you by results.”

Colette gleans a great deal of satisfaction from her board roles because she says, “I get to make a positive difference to people’s lives. I don’t go into any of those positions to seek personal glory, I do it to serve others. It’s very much about what I can give.”

In her mind, being a non-executive and an executive director doesn’t differ a great deal, however she does say that working as a non-executive is a “slower burn” in terms of tangible results.

Colette considers herself to be a champion of women in business. She encourages women in her own property business to optimise their potential and she firmly believes that as women, we owe it to each other to demonstrate what is possible in the work place.

When I asked Colette about what she thought the barriers were to women entering the board room, she was definite in her response, which was. “It’s their own beliefs about what they think they’re capable of that holds most women back.”

Finally, Colette and I discussed the differences between an executive and non-executive board role and she came to the conclusion that “it’s about time”. She felt that an executive role affords the office bearer much more time to get more involved in the business, whereas a non-executive has limited time and can only do so much.

It’s clear to me that Colette Grant is an inspiration when it comes to encouraging women to go all the way to the top in business. I agree with her when she says that it’s often women’s belief about themselves and their own capabilities that prevents them from being promoted to the board room, although quite what we do about that as a nation is a question for another article.

Rebecca Bonnington is a regular contributor to the3rdimagazine

1 Comment on Creating your reputation as you go through life