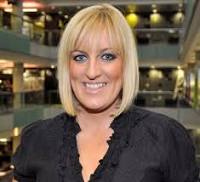 Steph McGovern saved the world’s biggest power tools maker £1 million at the age of 19. Not surprisingly, she got herself noticed by the media. Now the working class Young Enterprise alumna is the face of business on BBC Breakfast.

So how did she turn her early break into a stunning career? “I was a journalists’ dream – a gobby girl with an accent who was good at engineering.”

While studying A Levels at the town’s Macmillan Academy, she took part in Young Enterprise: her team made calendars, cards and washed cars. She financed her university degree with a year working at the nearby Black & Decker factory. The American power tools firm trained her in production techniques and sent her to a plant making the popular Leaf Hog garden-tidying appliance, which was struggling to meet demand. She soon figured out a way of manufacturing and cooling the key component, a fan, that sped production but maintained quality. “They were able to shut the factory at weekends and saved £1 million,” she says.

The achievement won her the title “Young Engineer for Britain.” It led to her first taste of BBC life, appearing on Radio 4’s Nice Work programme in 2001. She cadged an internship on Tomorrow’s World, then did “menial work” on Radio 4’s Money Box “answering the phone to millionaires wanting to know what to do with their money.”

Steph made it onto the Corporation’s payroll as a part-time researcher while studying science at University College, London. Within months she became the main daily financial news producer on the BBC’s Today programme, producing Evan Davis. By the height of the financial crash in 2008 she was writing the 10 O’clock News lead story nightly with Robert Peston. Judged still too young to become an editor, Steph then stepped in front of the microphone. As a stand-in on DJ Chris Evans’ Radio 2 show she once accepted a dare to read the news in the voice of the Godfather.

As the face of business on BBC Breakfast she’s done everything from interviewing the Chancellor to dancing an Irish jig for seven million viewers. Male-dominated BBC newsrooms can be intimidating, she agrees. But she has faced more prejudice for being northern. One (male) BBC manager said to her at the end of a job interview: “I didn’t realize people like you were clever.” But she opposes all-female quotas because they risk undermining the credibility of women who get top jobs. “If you are patient and you work hard I can’t see why you can’t get to do things,” she says.

The key, she finds, is networking. She blatantly e-mails people saying: “I really like your work and I would love to meet you.” She sees her background as her strength: “My view is that I am at the BBC to explain what is going on to my mum and her mates in Middlesbrough. So that gives me an advantage of everyone else in the newsroom.” 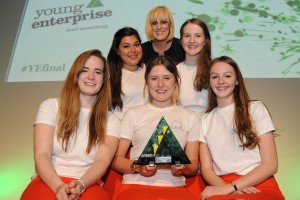 Prime from Tiffin Girls’ School, Kingston, London were named Young Enterprise Company of the Year 2013. They are seen here with the finals host Steph McGovern, the main business presenter of BBC Breakfast. Prime sold a special amplifier called megaphone made of silicon that works without electricity.