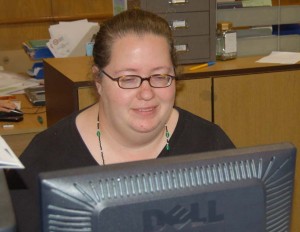 Biography
I am the IT/Systems administrator at Glasgow Women’s Library (womenslibrary.org.uk). Having studied Physics before gaining an MSc in the History of Science, I joined GWL in 2005 (and combine both with a continued interest in the history of women and science). In 2010 I helped to develop the Women of Scotland project with GWL and Women’s History Scotland, building a website that allows anyone in Scotland to record and map memorials to women (womenofscotland.org.uk). My work at GWL ranges from general day-to-day IT support to the development of our monitoring and evaluation system, as well as maintaining the Library’s online presence – Helen MacDonald (admin@womenslibrary.org.uk, Twitter: @liblogger)

Organisation Profile
Glasgow Women’s Library is a vibrant information hub housing a lending library, archive collections and contemporary and historical artefacts relating to women’s lives, histories and achievements. A welcoming and accessible service, we take pride in our genuinely integrated and continually growing communities of users, from professional researchers to those who, for whatever reason, feel remote from culture and learning. Learning is at the heart of what we do: we deliver over 200 innovative events and activities across Scotland every year, from film screenings to guided walks and core programmes including our Adult Literacy and Numeracy and Black and Minority Ethnic Women’s Projects.

i)How did you decide upon a career in technology? Did you study science subjects at school/college?
I studied Physics at university, which gave me a basic introduction programming (in the slightly eccentric form of Fortran 90), and also to web design (through an extracurricular course run by one of my student peers). I didn’t really decide upon a career in technology so much as stumble into one – it was only after a few years of tedious office work and temping that I was able to use my personal interest in technology in my work. Initially employed as a receptionist and general admin worker at GWL, it was sheer chance that I was able to help troubleshoot IT problems and help with the GWL website, and over the years that aspect of my work has become more important.

ii)What was the attitude towards technology as a career choice for women from school/college careers advisors?
As technology wasn’t the career route I expected to take, I can only really comment on the attitude to studying science – I know that all the universities were keen to address the gender imbalance in the sciences. I don’t remember being discouraged at school – it helped that all my really good science teachers were women. I do remember our deputy head being surprised that I so adamantly wanted to study Physics, but it wasn’t couched in terms of science not being suitable for girls (it was at least partly because the attitude was that if you had the grades, you studied either medicine or law).

iii)Have you experienced any discrimination/barriers to progress or would you consider being a woman in a male dominated environment to be an advantage?
Because GWL is a women’s organisation, it’s definitely advantage for me! But I’m also aware that this is anomalous – I’ve often encountered women’s organisations that outsource their IT support, and that support is still mostly male-dominated. But for myself, the barriers to progress – both personally, and for GWL’s IT needs – are dominated by the problems of funding.

iv)Do you think that there are any differences in attitudes/opportunity for girls choosing a career in technology now compared to when you made your career choices?
Technology has become a much more integral part of our lives: when I was at school, IT classes didn’t amount to much more than learning how to type on a desktop computer. Google launched the year I started university, and completely transformed my (and no doubt many people’s) attitude to the usefulness of the Internet: today, the ubiquity of the internet, of mobile technology, of online gaming, means that it’s no longer some esoteric, Masonic enterprise that girls have to fight to access.

v)What, if anything, does your organisation do to encourage more women into the sector?
It’s not really within our capacity – although we do try to encourage and support women to increase their digital literacy as part of our learning programmes, this is at a more basic, personal level.

vi)What do you think could be/needs to be done to increase the number of women entering technology businesses?
Visibility is important – as is a breaking down of the persistent bad attitudes towards women in the industry: things like the #1reasonwhy hashtag, in which women in the games industry addressed the reasons why there are still so few women in games development, may not directly encourage girls into the industry, but they are important in exposing sexism. The fact that women are taking a stand on this issue, rather than simply leaving for jobs with less negativity towards women, shows that the networks of support facilitated by social media can play a key role in encouraging to join and stay in an industry that has been slow to accept them.

vii)What do you think can be done to encourage women to stay in technology businesses and to advance to senior/board level positions?
Again, support systems, particularly in the more visible forums provided by social media, are important.

viii)Do you think that the increased use of social media/internet technologies make technology in general more acceptable to women/girls?
Yes. It also makes their interest in, and adoption of, new technology more visible, making it harder for people to paint technology as something for the boys only.

ix)Is there anything else you would like to add?
Working in an cultural/arts organisation is different from working directly in the technology industry. Obviously, the focus of the work is the Library’s collections and learning programmes – my role is to support this. We’re a charity, and depend on funding from a range of sources, which can be frustrating, whether limiting the hours I can work, or leaving us with ageing hardware that we can’t afford to replace. We’re certainly not in a position to issue smart phones to all our staff, or set up everyone with iPads.

It also means that I’m supporting women with a range of digital literacy, among my colleagues and our volunteers and users. I need to be aware of this when sourcing new technology and systems, to ensure that anything I implement is really fully utilised.

However, I’m also allowed a lot of freedom to develop systems that work for the Library, rather than being tied to proprietary systems. I’ve had the opportunity to developing our Monitoring & Evaluation system, ‘Library Out Loud’, on the open source software CiviCRM, as well as developing the Women of Scotland website (originally intended as a simple database), and building a presence on social media sites for the Library.