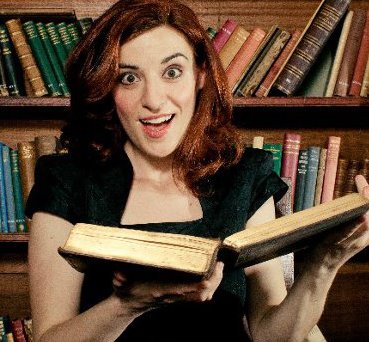 I first saw Keira Daley last August performing in her award-winning nerdy/funny/fact-packed cabaret tribute to some of history’s greatest minds, from Marie Curie to Hedy Lamarr, via Ada Lovelace, and that woman who invented Liquid Paper.

‘LadyNerd’ is her debut solo act and was so highly received by the Sydney Fringe that it won the ‘Award for Excellence 2011’. LadyNerd was then brought to the Edinburgh Fringe in 2012 where it acquired some amazing reviews and sell-out audiences.

I personally found her show an inspiration; she seems to be on a mission to reclaim the female nerd and did so by basing her show on the amazing and quirky stories of some incredibly talented and intriguing women who are too often overlooked in the history books. She reminds me of a modern-day Christine de Pizan.  Here Keira discusses one of the historical figures in her show, Ada Lovelace, who is a pioneer – if not THE pioneer – woman in technology.  (Introduction by Hollie Weatherstone)

At every turn, we expect computers to be there to do our bidding. It’s hard to imagine life without mobile phones, let alone life without so much as a calculator. Yet in 1842, a 26-year-old mathematician named Augusta ‘Ada’ King, Countess of Lovelace (commonly known as Ada Lovelace), knew that computers would change the world.  And at this point they were only a concept.

Ada was the daughter of Annabella Milbanke and poet Lord Byron – who separated when Ada was just a month old, purportedly out of self-preservation in the face of his madness.  In contrast, ever-rational Annabella was nicknamed by Byron “princess of parallelograms”.

Annabella had her daughter trained in mathematics and sciences – with another lady of the sciences, Mary Somerville, among her tutors – far removed from her father’s unchecked artistic whims and manias.

Of course, Ada was an accomplished musician and at times torn between the arts and sciences.  But at 17, when she befriended inventor Charles Babbage, her trajectory became clear.

Charles Babbage conceptualised the Analytical Engine – a theoretical device that is arguably an ancestral template for the modern computer. Ada was so inspired by Babbage’s work that she wrote it an algorithm – which, in a way, was a mathematical love letter to a phenomenon she’d never live to experience.  The algorithm, widely regarded as the world’s first computer program, appeared as an appendix to Ada’s translation of an Italian paper about Babbage’s work.

Ada predicted that it was more than a giant number-crunching machine that Babbage had conceived – that it would have uses in everything from visual arts to her beloved music and, of course, the sciences.  She saw more potential in the analytical engine than perhaps even Babbage did himself.  The two were great friends, an intellectual match despite their age difference, and corresponded for many years.

Sadly, Babbage never had the chance to build his analytical engine.  Meanwhile, Ada grew increasingly ill, physically and mentally. Despite her mother’s staunchest efforts to save her from succumbing to the madness on her father’s side, Ada struggled with mental illness, alcoholism, and gambling.  She died at age 36 from the bloodletting used to treat her uterine cancer.  Ada never met Lord Byron, who died when she was age nine, but she was buried alongside him at her request.

In her short life, Ada made her “dent in the universe” as Steve Jobs would’ve put it. Charles Babbage found Ada’s intellect a thing of awe throughout their friendship – she was a mathematical muse he dubbed the “enchantress of numbers”.  And Ada continues to inspire, with a day named after her to celebrate the achievements of women in science, mathematics, engineering, and technology.  There’s a web comic about her and Babbage as a crime-fighting duo called 2D Goggles (complete with Ada-worthy footnotes).  And, of course, there’s a tribute to her in my cabaret, LadyNerd. Undoubtedly, her impact is lasting.

Somehow she predicted that too.

“That brain of mine is something more than merely mortal; as time will show” – Ada Lovelace