‘I had a dream’ to build a fair business; it turned out rather well!
Jane Royston remembers vividly the moment when her business career took a dramatic turn. It followed a champagne buffet party in Paris in September 1986. She was 28 years old and head of IT in France for the US chemicals multinational DuPont. Originally from England, she had been with the company for six years following her graduation in pure maths from the London School of Economics. She was being fast-tracked for the top — one of those with CEO potential. 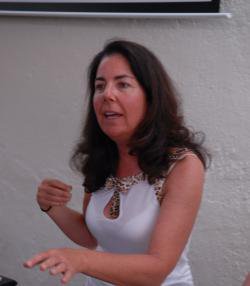 (Photo: Christoph Kaufmann)
The evening party was being thrown by DuPont’s European chief, who congratulated the staff for record growth and record profits. In order to achieve such continuing success in the following year, he remarked casually that 20 per cent of the global workforce were going to be sacked. Others at the party hardly demurred, recalls Royston. She felt incensed.

She went home and that night had a vivid dream, about setting up a company that worked on the basis of fairness. ‘I woke up and said to myself I can’t stay in DuPont anymore.’ That day she resigned.
She returned to her parent’s home in Geneva. There she set up her own IT company, NatSoft SA, to provide IT solutions for big companies in Switzerland and elsewhere. It would be a fair company with consensual or inclusive decision-making, where management involved staff in the decision-making processes.

For the first six months she visited IT managers all over Switzerland with hardly any response.
Then in March 1987 she took a phone call, in her parent’s basement, from the Social Security Department of the Swiss government. They asked if her company could update their entire IT systems. ‘Yes, we can,’ she replied immediately. She set about frantically recruiting skilled staff. ‘It turned out to be a massive contract, installing mainframe computers and database systems,’ she recalls.

Following that initial contract other clients followed: Roche, Nestle, Dow, private banks, the World Health Organization, and even for Vietnamese boat people under the auspices of the United Nations High Commission for Refugees.

The company grew to be the largest IT provider in French-speaking Switzerland, with 120 employees representing 27 nationalities, and a turn-over of SwFr 15 million. Fifty per cent of profits went to the employees in bonuses. She was voted the Veuve Clicquot Swiss Business Woman of the Year, 1993-94. In 1995 NatSoft received the Strategis award as the best managed SME in Switzerland, given by the financial monthly magazine Bilan, the Swiss equivalent of Fortune.

‘I set out to do good and I ended up doing well,’ she comments. One of her commitments to doing good was to take on staff from the long-term unemployed. With Royston at the helm, the company received 3,000 CVs from job seekers each year, interviewed 300 of them and took on 30 per year. Five of these had been out of work for as much as two years or more. She found that they were highly motivated. Once they had secured a job they were keen to retain it. They were the ones who would be at work promptly by 7am. She needed people with good IT skills but also with EQ or emotional intelligence, ‘those who were good at understanding people’s spoken and unspoken needs’.

‘It was not only the decision making that made NatSoft different,’ Royston says. ‘It was also that we kept our word with everyone, and never took advantage of anyone. For example, many other companies pay new immigrants less because they don’t know any better. We were transparent in all aspects including salaries. They were common knowledge because I felt that if I couldn’t justify why one person was getting more than another then they probably shouldn’t be!’
Royston asserts that ‘it makes good business sense to do the right thing: by treating employees right, you save money because you have a much lower employee turn-over, which is one of the plagues of the IT industry; by taking decisions consensually, you get immediate buy-in and save time persuading people to reluctantly do what you say; by being on time and on budget each time, you save money on marketing and client acquisition because of all the repeat business you get.’

Indeed, the company’s reputation for excellence of service meant that NatSoft achieved 95 per cent client retention from one year to the next. ‘We never let a client down. We were always on time and within budget, even if it meant working through the night or at weekends. When you get a reputation like that you retain customers.’

Nonetheless, after her husband left her she sold the company in 1996 to Cambridge Technology Partners in Boston. She had two pre-school children and couldn’t look after them and the company. ‘I had to make a choice and chose the children.’ Cambridge paid ‘turnover times one’, she says. She had run NatSoft for 10 years and 10 days. At first she stayed on at their request. But ‘it was like rearranging a house you have lived in. I couldn’t stand it.’
She left and for six months did nothing whilst she thought ‘long and hard about what I enjoyed doing: people, selling, strategy and projects for clients but not operations.’

At first she helped people on a pro bono basis to start up their own businesses. Then the Swiss president asked her to go to Bern to advise him and the government on the new economy, based on the Internet.
In 1999 she was appointed the chair of entrepreneurship and innovation at the Federal Institute of Technology in Lausanne. She held the post of professor there till 2005. ‘It was a brand new chair, first of its kind in Switzerland.’

Within four years she was teaching at other major universities in Switzerland: Zurich, Basle, St Gallen and Geneva. At the same time she set up a European Task Force for Entrepreneurship. Then in 2004 the federal government’s department of economy asked her to design and set up a National Entrepreneurship Centre in Lausanne.
She now sits on the boards of seven companies and foundations, including being the chair of PRO which employs 200 handicapped people in Geneva. Royston says they are particularly skilled at doing repetitive work that requires zero per cent defaults, such as packaging cosmetics and doing the laundry for international airlines.

Royston says that her proudest achievement at the macro level was to build up NatSoft. And at the micro level she was glad ‘to act very quickly’ to abort a coup d’état within the company when her partner tried to set up a rival company pinching her customers and employees. ‘He made the strategic mistake of resigning. Our employees’ best interest was to stay with us.’

Royston met her German partner Harry in 2006 at an ashram in Kerala, south India, where he was teaching yoga. She was undergoing Ayurvedic treatment for cancer which, she says, has not reoccurred so far. ‘So I guess it was successful.’
Like the English Quaker industrial pioneers, whom she trumpets, she affirms that businesses can thrive by doing the right thing for employees and customers alike.