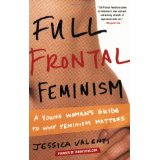 Despite Jessica Valenti’s book “Full Frontal Feminism: A Young Women’s Guide to Why Feminism Matters” being aimed at young American women, I – a fourteen year old Brit at the time- was inspired by it and, as corny as this may sound, it changed my life.

A fresh, blunt and fun style of writing is used by Valenti to help young women make the transition from a woman that doesn’t identify herself as a feminist but has feminist values, into a proud and informed feminist.

I found this particular to my experience as before picking up “Full Frontal Feminism” I had little to no ideas on what feminism was; if I was a feminist, and like any girls my age I questioned if feminism was important in 2011. Ask me now? I’d tell you it is tremendously important. Jessica Valenti taught me that there are still countless problems caused by sexism, that have yet to be overcome, but that we are progressing.

As I mentioned earlier, I am under the target audience age. Yet, I believe that any mature teenager can handle this book. The crude language used at some points may be off-putting for people to give to their teenage relative, or for some older readers it may seem too informal. But reading this myself, knowing zilch about feminism, it was like having a conversation with a cool older sister. Forget the extremely theoretical -and slightly biased- way feminism is taught in schools, Valenti makes feminism appealing to free-thinking independent young women, whilst using shocking anecdotes and informative statistics.

As much as I’d like to preach “Full Frontal Feminism” this entire review, I cannot recommend it to those who have read a great amount of feminist literature as it is ultimately an introduction to feminism. A must read for all those who have found themselves using the phrase: “I’m not a feminist but…”

I was hooked on the first chapter, and ready to make a change in my lifestyle on the last. Jessica Valenti involves the reader successfully by using an exercise entitled “What’s the worst thing you can call a woman?” This activity doesn’t necessarily make you a feminist, but it helps the reader recognize the state of society and it’s still present sexism.

Throughout the book, I quoted Valenti’s words continuously, one that particularly annoyed my mum is: “We’re all brought up to feel like there’s something wrong with us. We’re too fat. We’re dumb. We’re too smart. We’re not ladylike enough- stop cursing, chewing with your mouth open, speaking your mind (…) F*** that.” Following that paragraph is one that I wrote down repeatedly in my diary, it really motivated me and made me feel like I’m worth something, whatever society thinks: “You’re not too fat, you’re not too loud. You’re not too smart. You’re not unlady like. There’s nothing wrong with you.

The book really helps encourage the reader take part in feminist action whether that’s in the community or nation-wide. “It doesn’t matter what you’re doing, so long as you’re doing something. Even if it’s as simple as speaking up when someone tells a nasty-ass sexist joke.”

The final chapter is entitled “Get To It.” It gives ten columns from Violence, through to Pop Culture, Work and Money, Reproductive Rights and even Spreading the Word, each with around five bullet points on exactly how to get to it.

“Full Frontal Feminism” is lively, consistent and accessible, which is why this book has inspired so many. I handed it to my best friend straight after reading; it is vital to all young, smart and modern women.

Reviewed by Lorna, a student working with Glasgow Women’s Library