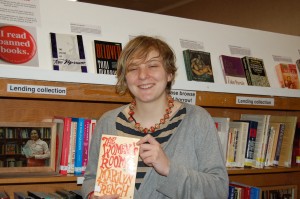 The Women’s Room, first published in 1977, has come to be one of the most important and influential works of fiction of the twentieth century.

The book follows the life of a young woman, Mira, from adolescence to middle age, and chronicles her experiences, and the experiences of her friends and piers. The book exposes the social and sexual dilemmas and pressures faced by young women, and delivers a potent critique of the forceful patriarchal culture dominant in 1970s America. It was for this reason primarily that the book was rounded upon by a male dominated media, who accused it of being, among other things, ‘banal’.
This however could not be further from the truth, and is revealing of the pettiness and meanness of patriarchy in documenting a woman’s artistic achievement.

The comments of the critics can be attributed the book’s tendency to reveal the reality of a woman’s everyday life. Indeed, in the heart of suburban white middle class America, ‘banal’ may be an adequate description for a woman’s everyday existence, yet French’s handling of this banality reveals the inherent loneliness and brutality which dominates a woman’s life in this context.

“Sometimes when she [Mira] was having her coffee and reading her paper, the sun would slant in through the big kitchen window and pour across the wooden table and her heart would walk slowly through the large house and feel its cleanliness and order and would thing that the comfort of order might after all be the best on could hope for, might even be enough…”

The image conjured by French of a woman, isolated and anonymous in her home is a powerful one, and it is a testament to French’s writing, that these passages describing mundane domesticity are not ‘banal’ but are intense, almost elegiac, pieces of writing which grip the reader, and deliver their message forcefully.

The novel also exposes the sexual and domestic violence encountered by women, and the injustice of a woman’s situation in this period. The inevitable ostracisation of a woman after her divorce, the frequency of incidents of domestic violence and the virtual impossibility for a woman to prosecute her rapist, are all issues tackled by French to good effect.

One criticism of the novel for today’s reader might be that it has somehow become dated, and that it describes a bygone age. Certainly the place of a divorced women in society has improved, and there can be no doubt that incidents of domestic violence and rape are dealt with much more sensitively today than in comparison 1977. However these incidents still occur all to regularly and sexual and domestic violence is still a reality for too many women. Prosecutions for these crimes are still difficult to achieve, and many incidents still go unreported. In today’s context therefore, ‘The Women’s Room’ still retains a scary relevance which should not be underestimated.

This book is important for so many reasons. It breaks with all literary conventions about writing about women’s lives. There is no great romance, no wonderful future for its heroine, and certainly there are no wonderful heroes. It is also important however for the manner in which it describes women’s relationships with other women. ‘Sisterhood’ is an incredibly powerful force in this novel, and the sense that women can come together to support each other and change their situation steadily becomes a hopeful reality.

This novel is essential reading for any woman, or man, with an interest in ridding the world of patriarchy. It is brilliantly written, incredibly powerful and often unnerving.

The Women’s Room was reviewed for the3rdimagazine by Alice Andrews