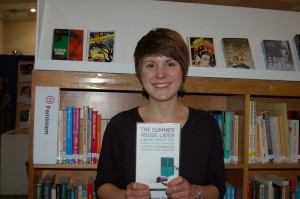 When I read this book for the first time, it left me absolutely lost.

Actually, I am not quite sure if that circumstance has changed since then, at least my view on the stories changes every time I pick up the book. I became addicted to the mysterious atmosphere that is created in every single story out of the nine which the book consists of.

Every short story in Judith Hermann’s collection The Summer House, Later will leave you with a large range of emotions: melancholy, surprise, and also loneliness. It is almost impossible to just read this book, put it away and go on. I’ve often re-read this book to find the keys to the stories that are told, and to find a personal interpretation.

The stories, apart from two, are set in Berlin and its surroundings. Berlin, a city which is home to a lot of creative people with their ideals, their dreams of a bohemian life, their feelings of freedom in that coloured metropolis with its unlimited opportunities.

That’s how the title story starts. The narrator and Stein are friends, living a bohemian lifestyle; drinking, and sometimes consuming drugs. Stein has never had what one calls “home”. In front of the decrepit house he starts to daydream, “I’ll build up a salon here, and a billiard room, and a smoking room, and separate rooms for everyone and a big table in the back of the house, …” The narrator is irritated by Stein’s behaviour. Stein adds, “This, here, is one possibility, one of many. You can go with it or you can forget it.” The following winter months are going on as usual. During the months of the following spring Stein disappears but the protagonist receives postcards from him. He tells the protagonist about the work on the house. In May a letter with a newspaper article in it arrives. Friday night the former manor house in Canitz burned down to its foundation. The owner, a Berliner who bought the house (…) and restored it, has been reported missing since the fire. The cause of the fire has not yet been established. The narrator reads it several times and puts it away, and thinks “later”.

This story is a close-up on humanity, on the inability to open to each other. Additionally, in my point of view, it describes the feelings of a whole generation. People in their twenties and thirties are longing for a different life, testing themselves, feeling like indestructible individuals, hesitating to make decisions and telling themselves “later”. And “the moment before happiness”, how the subtitle of the collection is pointing out, passes without being taken to turn into proper happiness. Or even without recognizing that happiness is already achieved or only a stone’s thrown away. They always expect “more” from life.

It is the simple language, the short sentences, the detailed descriptions which evoke the special atmosphere in the stories and make you think about them, looking for your individual keys to decode them.

The stories pretend to tell a story out of an everyday-life situation, the camera fades in, and fades out again, emotions are not named directly. The protagonists are even often not really characterized by the narrator. Nevertheless, almost every story provides an unexpected ending, an unexpected turning point.

The stories which accompany the title story are about a girl who has just tried to work out their family history, about young adults who are playing “imagining a life like this” during a trip to a tropical island, looking for something exciting in their lives, where at last nothing particular happens, even the announced hurricane does not turn up. Another story is about a young girl and her relationship to her boyfriend which is parallel to her grandmother’s story and the two life stories are bound together through a red coral bracelet which breaks in the end and the protagonist seems to be freed from her heritage and her unfortunate relationship, except the reader is not. Another story is about a man who has an encounter with a girl who disappears after a while as suddenly as she has turned up, just leaving the protagonist’s life upside down …

All stories deal with the main topics love, transience, the disability of communication between human beings and missed opportunities, which might never come back again. The characters in the story often live more in their memories than in the present. The opportunities they are waiting for are often revealed as illusions, possibilities to lose you in your daydreams and ideals and show how people are trying to keep the doors open, like the protagonist in the title story does.

What you do with this is up to you. You can read this book, focusing on the enjoyable use of language, you can close the book, wonder about it but forget also about it quickly; you can be impressed by the penetrative description of human life, and feel agitated by the brutally honest samples of life. You can even be left with the feeling that you want to look up more precisely on life and its offered opportunities after its lecture. Above all, that’s what it has done to me.