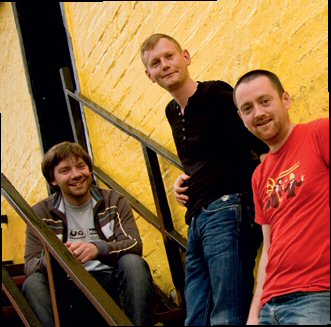 Yellow Brick House Media is a consortium co-operative of four businesses specialising in new media content and marketing, television production, web development and graphic design. By combining their complementary capabilities, the members will be able to pitch for bigger contracts and achieve immediate strength and scale. The new business was born in 2010 after two of the principals – Dougal Perman and Roger Dubar – met at a networking event. Perman said: ”It allows us to compete on equal terms with bigger marketing, web and digital agencies who may be seen as the first port of call for big clients tendering these kind of jobs.” Dubar added: “It is very low risk because there are no overheads, no extra staff and we can build the brand gradually.”

A specialist CDS adviser considered the members’ purpose and outlined collaborative options. Focusing on the consortium model, he showed how it applies in other situations and how it could operate for this group.
CDS guided the members through the set up stage, providing memorandum and articles of association and developing a customised members’ agreement, all at no charge.

FUNDING THE BUSINESS
Start-up investment is in time rather than money, as the members are using their existing skills and resources to create a web and marketing presence. As a virtual agency, no additional office space is required.
THE CHALLENGES
Board meetings are scheduled on a regular basis to discuss opportunities, issues and work in hand. The members use shared online tools such as Google Docs to work collaboratively and formal and informal brainstorming sessions are used to flesh out creative ideas and concepts.

THE BENEFITS
Scale – “The consortium instantly gave us scale which greatly improves our market presence and access
to larger contracts,” Dubar said. “It’s a much stronger pitch than the usual main contractor and sub-contractors approach.”
Scope – “Inner ear specialise in internet distribution whereas Surefire have a lot of experience
in broadcast,” Perman explained. “Adding Ryan’s graphics, branding, and website design skills and Don’s more extensive development and database management experience gives us a really strong offering.”
Independence – collaborating allows each member to extend their reach without detracting from their core business or brand.
Low risk – as a virtual agency, no additional premises or staff are required.
Flexibility – other members with complementary skills can be invited to join the consortium as demand grows.
Shared ownership – “We’re content to share equally in the decisions affecting the consortium given that the overall aim is to promote the growth of our separate businesses,” Perman said. “It will be easier to explore a range
of collaborative ideas now we’re working in a clear structure.”

Leave a Reply to Phil B Cancel reply