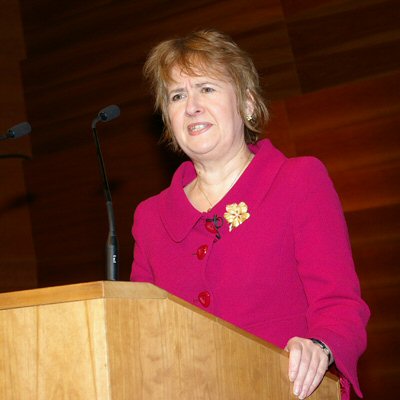 Roseanna Cunningham was born in Glasgow in 1951 and spent her early years in Edinburgh and East Lothian. In 1960, she went to Australia with her family.

She returned to Scotland in 1976 and within only a few months of her arrival was working full time at SNP HQ, while also being involved in branch and constituency politics in Edinburgh.

I met Roseanna in Crieff, part of her Perthshire constituency.
Having entered Parliament aged 44, Roseanna Cunningham cannot accurately be described as a career politician but the tag of career activist is certainly appropriate.

Roseanna was born in Scotland, her parents moving to Australia when she was just 8 years old. Politics was important from an early age; her great uncle was a Labour MP in Australia and recent research into the family by a relative has revealed that another was a prominent NUPE and Labour Party activist back in Scotland. So it might be asserted that the activism gene runs in the family – although Roseanna revealed that neither of her parents were in the least interested in politics!

As a 15 year old in Australia, against the backdrop of the historic Hamilton bi-election of July 1967, when Winnie Ewings victory for the SNP put devolution firmly onto the agenda, Roseanna wrote to the Scottish National Party (SNP), and their positive response encouraged her to become an overseas member of the party. While in Australia Roseanna was a member of the Australian Labour Party and it would have been possible for her to pursue a successful career in politics there, maybe beating Julia Gillard to the post of PM, but her heart was in Scottish politics and so after taking a degree in history and studying librarianship, Roseanna returned to Scotland.

After a period with James Thin Booksellers, Roseanna became a research assistant for the SNP, a position she held until 1979 when, following an unsuccessful referendum for devolution, the party was forced to make significant redundancies. She used the redundancy to part-fund a law degree and on completion trained as a solicitor with Scottish Local Authorities, first with Dunbarton and later Glasgow City Councils, undertaking a wide variety of court work.

Throughout this time Roseanna continued to be active with the SNP but when rule changes introduced by Margaret Thatcher’s government in the late 1980’s meant that senior council employees, including advocates, were prevented from being politically active, Roseanna moved to private practice.

Having contested several council seats without success and following the resignation of prominent SNP member Jim Fairlie, Roseanna was selected as a parliamentary candidate. In the elections of 1992 Roseanna failed to unseat Sir Nicholas Fairburn but, following his sudden death, took the Perth and Kinross seat at the bi-election. In what was a first for the SNP, Roseanna retained the seat in 1997 and went on to take her place in the newly formed Scottish Parliament in 1999.

In the 2001 elections Roseanna didn’t stand for election to Westminster, preferring a full-time role in the Scottish Parliament. Her Holyrood career has seen her as Convener of the Justice, Health and Rural Affairs and the Environment Committees, culminating in appointment as Minister for the Environment in February 2009.

I asked Roseanna whether she thought that there were issues that were unique to being a woman in politics.

“The differences are irritating and annoying but marginal. For example, dress. My job as Environment Minister takes me to all corners of Scotland, in all weather and I can be in wellingtons as often as shoes. It shouldn’t be an issue but what I wear is widely reported. I couldn’t get away with wearing the same suit on successive days but I’m pretty sure that no-one would notice if one of my male colleagues wore the same business suit, let alone comment. While this seems trivial I do have to be careful that what I wear to make sure that it doesn’t overshadow the real story.”

“Also, when I was young I looked young and I had to try hard to look serious in order to be taken seriously. While this can be a problem for men as well as women I do think it is a particular issue for young women.”

Being in the public eye must take it’s toll too?
” It is certainly the case that MPs and MSPs are more visible now than when I first went into politics but I don’t think that the media scrutiny prevents women from standing for public office. For the most part I find people to be very respectful of my privacy. I live in my constituency and drink in the local cafes and take public transport so local people are used to seeing me and see that I am living a normal life in the town, just like they do. And besides, my constituents are used to seeing Ewan McGregor and Gerard Butler walking the streets so compared to them I’m a minor celebrity!”

Have you found any difference in attitude to you as a woman?
“Maybe the odd comment but there has never been any outright sexism my time with the SNP. Women have played an important role in the party for a very long time, going back to Winnie Ewing in the 1970’s. There are many women involved in Scottish nationalism but politics can be unforgiving if you have a family. ”

“Parliament cannot work school hours. Voters would not be happy if their elected representatives only worked from 9.30 to 3.30, not at all at weekends and took breaks to coincide with school holidays. Even if parliamentary sittings could be changed to fit these hours the travelling to and from Holyrood, to meetings and the many commitments to speak at events, not to mention surgeries on Saturday mornings, make normalization of working hours virtually impossible.”

“While the hours are the same for men as they are for women it is still true that men tend to have a more readily accessible support structure in place as many have partners who attend to the bulk of the childcare, allowing the man to concentrate on their parliamentary duties. Having said that I have a colleague who has had a baby while serving as an MSP, another who has had a second child and another who is giving birth towards the end of the year, so it is possible.”

“We need to educate people too. There is an excellent creche in Holyrood but some voters deride this as a perk rather than applauding it as good practice that should be adopted in all workplaces.”