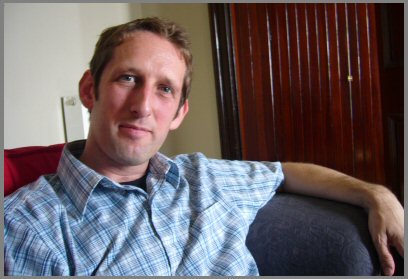 The Fife Diet was started by Mike and Karen Small, whose tireless efforts have inspired hundreds of people to eat more local produce.

They developed a simple concept, called it The Fife Diet and started a revolution!

We are delighted to have had the chance to talk to Mike and to welcome The Fife Diet to our team of regular columnists.

Firstly, I asked Mike why he had decided to start the Fife Diet Project.
“Frustration really. There was a groundswell of support for environmentally friendly projects but there was a distinct lack of leadership – everyone was waiting for someone else to do something. It has been a couple of years since we started the Fife Diet project and things have changed. There is now a Climate Change Bill in Scotland which is world leading.”

And is there anything in your background that led you to start this project?
“Not really. I’m not a great gardener or cook! At one time I drove for Green City Wholefoods in Glasgow. This gave me an introduction to ethical foods and I have had an interest since then.”

And how did Fife Diet develop and where is it going?
“We started the project with just 14 people at the original launch. All of the original members were involved in environmental projects but now the membership is very diverse. We aim to build Fife Diet into a mass membership movement. We currently have almost 1,000 members and this is growing all the time. We want to grow by staying local, by which I mean Fife Diet should remain a community project. The idea is to have lots and lots of small community groups, sourcing food locally and meeting and eating together each month. The Fife Diet project will be the umbrella group allowing all of these community groups to share ideas. It is really important that each project stays true to it’s local roots.”

“The website is a great way of bringing individuals and groups together. We publish recipes, links to organic farms, farmers markets and environmental groups. Sharing recipes is very important as a lot of skills have been lost in our fast food lifestyle. Our grandmothers would have no problem rustling up a meal from local, seasonal ingredients but we have lost that, as we have ingredients from all over the world available, fresh all the time. Many people don’t even know how to cook a meal from scratch…this is something we want to change. And skills like jam making and fruit preservation. The website gives lots of ways to use and keep foods when they are in season for use when they are out of season. Our grandmothers knew the value of thrift and prudence and these are values that we need to nuture if we are to change the throwaay society we live in.”

And eating locally has global benefits.
Here in Scotland food, including food miles, nitrous oxide from fertiliser, methane from grazing, disposal of waste food and energy used in processing, accounts for around 25% of greenhouse gas emissions. Speaking ahead of a recent meeting Roseanna Cunningham, Scottish environment Minister said that the scheme …”has positive environmental benefits, with the overall project making an estimated saving of 1,737 tonnes of CO2 by reducing food miles.” Scotland is now leading the world in climate change legislation, aiming for a 42 per cent reduction in emissions by 2020. Encouraging people to eat locally really help in this process. One concern raised in the early stages of the project was that it was protectionist, that it discriminated against third-world food producers. But choosing to eat locally and seasonally isn’t anti trade, just anti needless air-miles. And after all, many developing countries are affected by the realities of global warming now. Where there isn’t a locally produced alternative the Fife Diet are keen to develop partnerships with food producing communities worldwide.

And while the project started in Fife, it has gained recognition far beyond it’s borders.
The project was described as “Inspiring” by Sir Crispin Tickell in the two part Food Programme (Radio 4, October 2008) dedicated to local eating and the Fife Diet.

Professor Tim Lang said of it: “I’m a fan of the sheer daring, the wonderful experimentation of it.”

Satish Kumar, Editor of Resurgence and Programme Director at Schumacher College called the Fife Diet: “An inspiring sign of the coming movement for real change and resilient communities.”